First of all, you should install a dotnet version on your local system. Since I use windows, I use choco to install my dotnet SDK.
You can also install it from their website.

Note: I used version dotnet-core 5 for this ‘project’

Starting a new project is easy, just put the follow command in your terminal:

now when you enter the YourAppName directory, you should be able to start the project in dev mode with dotnet watch run.

You should be sent to localhost:5001 which is the default for dotnet apps. Here you’ll see an example welcome page built with bootstrap.

Switching from Bootstrap to Tailwind

Get rid of Bootstrap

While Bootstrap still is a widely used and good CSS framework, we’ll be using TailwindCSS (duh!), so let’s delete all files in the css directory.

Also delete the <link> elements refering to them in Pages/_host.cshtml

Tailwind all the way

Now let’s try out Tailwind. First of all we need an executable. The executables can be found on their GitHub repo here. Be sure to grab the exact one for your OS.

Once the file is downloaded, move it to the current project directory. 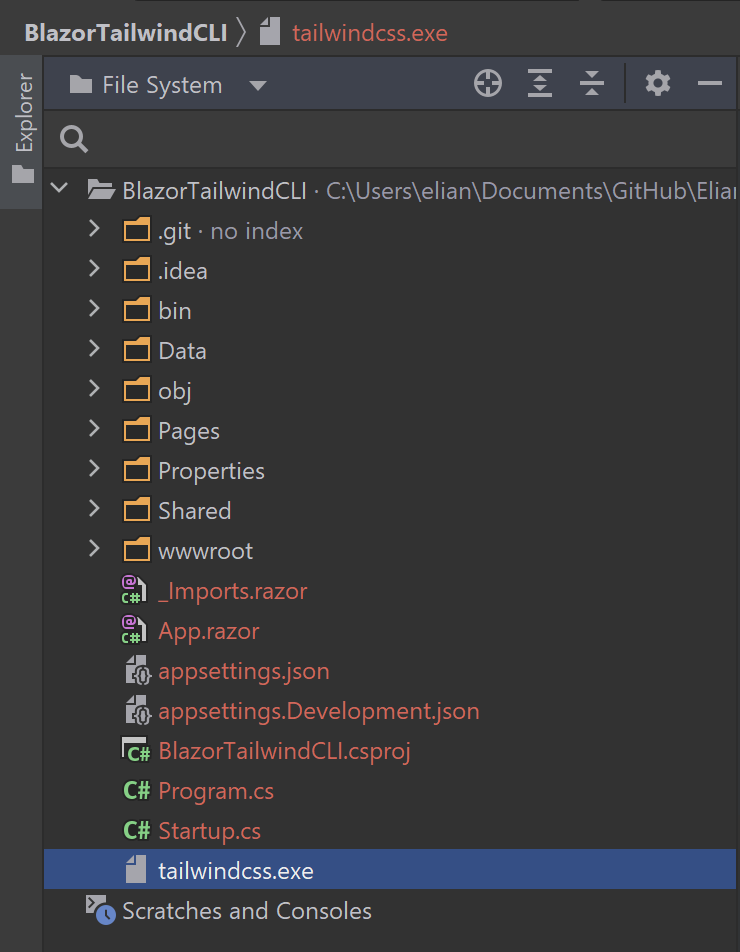 We can now see that a file called tailwind.config.js is made in the project root! Yay!

Now let’s make a tailwind.css file in the wwwroot/css directory with the standard Tailwind imports

The only thing we need to do now, is build our Tailwind config into browser ready CSS and link it from our HTML.

The TailwindCLI has a command for building and watching the css file. At the moment, we still need to give the entire path to the input and output path, but you can build a seperate script to take care of this ofcourse!

If you’re working on the CSS, you can add the --watch flag to the command above, the CSS wil then recompile on edits.

Note: add your output.css file to the .gitignore if you’re using git, so the file won’t get uploaded.

Now let’s add the file to Pages/_host.cshtml by adding

You can now use TailwindCSS as usual!